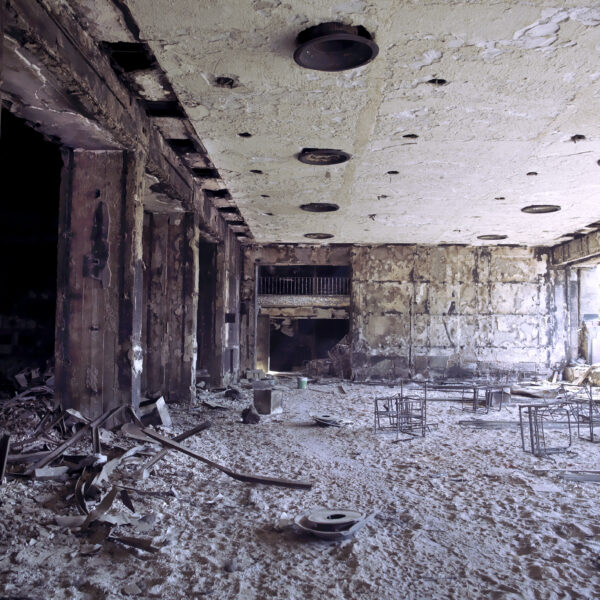 The headquarters of the NDP, the National Democratic Party of Egypt, was burned down on 28 January 2011 during the Arab Spring Revolution. The building housed the party of the then president, Hosni Mubarak, state commissions such as the Human Rights and Women’s Commission, a bank and other official political offices. In April this year we were invited to Cairo for a couple of days by a group of journalists to get to know the city, before participating in the International Conference on Tourism and the Media, held in Marsa Alam on the Red Sea.

During the tour we stopped at the Egyptian Museum and from the garden it is absolutely impossible not to notice the back of the burnt-out NDP building.

So as my journalist friends and my photographic instinct that cannot be resisted have taught me, I left the group to satisfy my curiosity. Standing in front of the large, high iron gates at the entrance, I noticed that they were open. So I took my adventure a little further. I didn’t want to go alone to avoid an unpleasant surprise like finding some security guard or an upset policeman, so I returned to the museum to join the first colleague I met. With our hearts pounding, a trickle of sweat running down our foreheads, and obviously very nervous, we entered with virtually no resistance. As soon as we entered, we turned right and went up some stairs that led us to what I thought was a lobby, and continued up some more luxurious stairs to where I photographed this room and this hall, where I think the PND offices were (someone correct me if I’m wrong, please). What an adrenaline rush! After taking 10 pictures in several areas of that floor we went down to leave by another part of the complex and continue taking pictures on the way.

I left there feeling proud to have photographed such an important symbolic testament to the revolution and fall of Egypt’s three-decade dictatorial regime. A historical document that probably won’t stand for much longer. Countless important documents were lost during the fires that ravaged the building, making the NDP corruption trial more difficult.

The photograph was taken with a Classic 501 CM Body, Carl Zeiss 4/40 lenses and adapted Digital Back CFV, all from Hasselblad and a 400 ASA, Shutter 30 and 4 F stop. The image has been processed from a RAW file with Hasselblad’s Flexcolor application and minimally optimized into a digital jpg file.