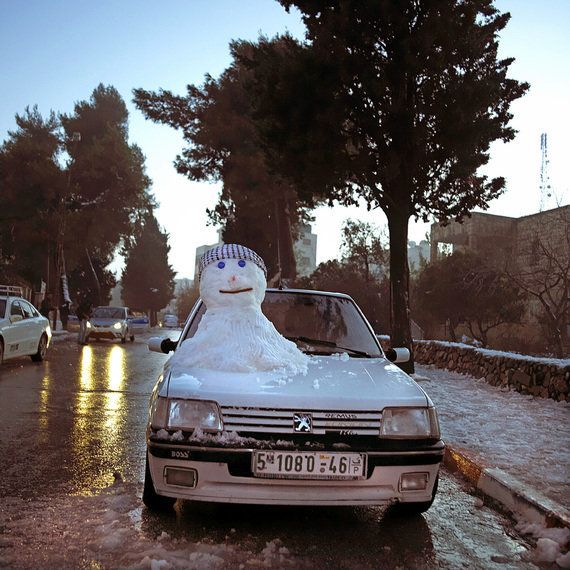 It’s my first time in Palestine. It may seem strange, but I’m looking forward to it.

I had heard so many stories about how the Israelis get tough at customs and checkpoints that I was stressed out, with the adrenaline rush, that rush that is part of the lives of so many journalists. We finally entered a place where you can’t go back to Israel, on the highway that goes to Jerusalem from Ben Gurion Airport.

It was a surprise to see that the hills on both sides of the road were snow-covered: something that is not very usual. The snow has a peaceful effect, it takes away the noise and whitens the atmosphere leaving it virgin.

We started to enter a neighborhood on the outskirts of Ramallah, but I couldn’t see anything through my window, so I tried to lower it. I couldn’t. At that moment, several snowballs hit that window like shots and scared me so much that I almost ended up on the floor of the car. They were kids playing, throwing balls at the cars: thank goodness I didn’t manage to roll down the window.

Oddly enough, during my week in Ramallah and Jerusalem, that was not the only time I saw kids throwing round objects. What a game!

A block away from my hotel, almost at night, I see a Palestinian snowman on top of a car. I ask the taxi driver to stop, look around to make sure no kid is going to throw a ball at me, and go over to photograph it. In the end, the kids who had made the little snowman took pictures with me, they too were excited.

THE CITY OF ANGELS