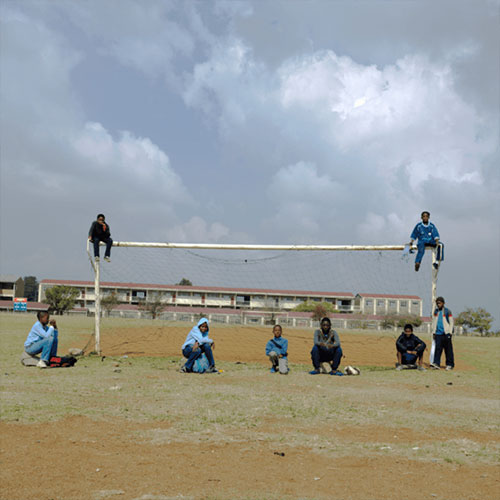 Mandela and Soccer: “Being happy with what one is and what one is doing is well being between mind and body.” was found on the cover of a notebook from a visit to South Africa in 2009. The smell of the ocean’s spray blowing in the wind and even the sound of the crashing waves must have been the sensations of hope to him then.

When a human life has been brought down to confinement the longing for freedom is definitely intensified. A strange feeling came over me that day that in order to make a difference in the world something drastic sometimes has to happen. Is risking freedom the sacrifice needed to achieve equality? The writing on my notebook must have been about Mandela’s happiness in his pursuit that kept him in well-being. 10 years ago I visited South Africa, this seems like a long time ago but it has been 25 years since the African National Congress has been in power which is even longer. It was a few months before the 2010 world cup of soccer, that coincidentally Spain won and the first time the world cup was held in an African country. I took a personal interest in visiting South Africa photographing subjects that were of interest.

Of course I had to visit Robben island just off the coast of Cape Town, the prison where Nelson Mandela served for 27 years. On May 7, South Africa voted in their 6th democratic elections since apartheid. It seems as though once again the African National Congress has won. A few hours after a clear win Nelson Mandela’s official twitter account @nelsonmandela was quoted in saying “We need to know with a fresh conviction that we all share a common humanity and that our diversity in the world is the strength for our future together.” Out of the fortress of white power in South Africa in the early 1900’s grew African nationalism and this bred politicians constructing racial rule which turned into segregation hence “apartheid”.

A young law student by the name of Nelson Mandela became so horrified about what was happening that his ambition became to fight for what he thought was right and how he wanted to fix the world. He joined the ANC and quickly became an underground leader, it wasn’t long until warrants for his arrest began to fly. He became quite famous for his disguises and successful for dodging the police. Eventually when he was on trial for conspiring to overthrow the government from a mass non-cooperation national strike, he read a 5 hour statement, his final words then reciting from memory while facing the judge were: “During my lifetime I have dedicated myself to this struggle of the African People.

I have fought against white domination, and I have fought against black domination. I have cherished the ideal of a democratic and free society in which all persona live together in harmony and with equal opportunities. It is an ideal which I hope to live for and to achieve. But if needs be, it is an ideal for which I am prepared to die.” Eventually, Mandela was freed from prison.

In 1994 he became President of South Africa and his awards are many. Being described as the Father of the Nation his party has long lived his legacy. I agree we must not forget him in moments like these, but more importantly not forget what he fought for. Many changes have swept through the party and through South Africa in recent times. Just to name a few, the angry cries of economic failure, corruption, poor education, unemployment rates, the need for land reform, etc.

If we share a common humanity then why do we try to have more than others, and if diversity is the strength of our future then why do we create gaps between have and haves nots. If we talk about politics shouldn’t we concentrate on checks and balances? As Spike Lee says “Do The Right Thing”. No more said.

FROM AN AIRPLANE WINDOW